The Uyghur Forced Labor Prevention Act (the UFLPA) came into effect last week, and US Customs and Border Protection (CBP) and US Department of Homeland Security (DHS) have released guidance for importers for demonstrating that their supply chain is free from content derived from forced labor. As detailed in our February 2022 article, President Biden signed UFLPA into law on December 23, 2021, with an effective date of June 21, 2022.

In an effort to aide importers’ compliance with UFLPA,

What does the UFLPA do?

The UFLPA establishes a rebuttable presumption that all goods mined, produced,

or manufactured wholly or in part in Xinjiang were made with forced labor; therefore such goods will presumptively be denied entry into the United States. The rebuttable presumption applies to goods that contain any level of materials produced with forced labor and at any level of the supply chain. Importers will need to include a detailed description of the supply chain for the imported goods and their components, including all stages of sourcing, manufacturing and production. For instance, CBP may deny entry to clothing that was made in and shipped from a 3rd country if CBP suspects that the clothing contains cotton picked by forced labor in Xinjiang.

CBP may exclude or detain, seize or forfeit the goods presented to it for importation if it believes the goods are within the scope of UFLPA. To overcome the rebuttable presumption, the importer must demonstrate with clear and convincing evidence that the imported goods were not mined, produced, or manufactured wholly or in part by forced labor. If the importer overcomes this burden, the CBP Commissioner will determine that an exception to the presumption is warranted and the port director will release the merchandise.

Where should importers look for guidance?

DHS also recommends that importers use DOL’s Comply Chain as guidance for developing and demonstrating due diligence in the supply chain. Namely, due diligence processes should include procedures for 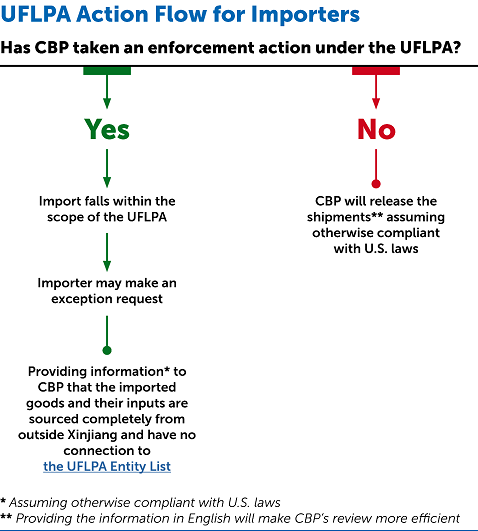 According to the DHS Guidance, importers demonstrate to CBP “with clear and convincing evidence” in order to overcome the rebuttable presumption and demonstrate that the goods were not made wholly or in part with forced labor. This includes

The DHS Guidance provides detailed information on the evidence importers need in order to overcome the rebuttable presumption. For instance, for supply chain mapping, DHS explains that “identity preservation requires each product input to be packaged, processed, and traced separately from other product inputs or modifications throughout the supply chain. Most importantly, it does not allow any commingling of product inputs at any point in the supply chain.” Importers will need to document how the imported goods were made – all the way from raw materials to finished goods, listing all entities and locations involved, including processes that were in-house as well as partially or wholly outsourced and the relationship between the entities involved.

What will be the focus of UFLPA implementation and enforcement?

CBP has the authority under the UFLPA to deny entry to any goods suspected to be sourced from or produced or manufactured in Xinjiang, China. Nonetheless, due to the broad authority and discretion and potential application of the UFLPA, CBP will likely begin implementing and enforcing the UFLPA on a more limited basis by denying entry to goods with direct or indirect connection to entities on the UFLPA Entity List.

The UFLPA Entity List includes some of the entities previously listed on Withhold Release Orders (WROs) as well as some new entities: